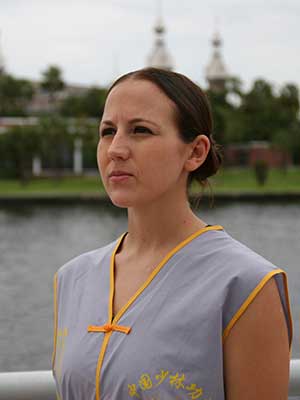 Megan Westerman began martial arts in 1995 and earned a 1st degree black belt in Okinawan Shorin-ryu karate at the Okinawan Shorin-ryu Karate school in Orlando, Florida. Since 2007 she has trained in Kung Fu, Taiji, and Sanda at Mt Song Martial Arts Academy in Tampa under Mario Salazar. She is currently an instructor there and director of the Mt Song Youth Kung Fu program. She is a multiple Gold-medalist and Grand Champion in the ICMAC and USAWKF circuits and is currently a member of the US National Traditional Kung Fu Competition Team to compete in O-Mei China. She studied Kung Fu and Mandarin in China from 2010-2011 and honored with the title of “Jiao Lian” (Coach) of the Shaolin Wu Seng Hou Bei Dui in 2011 while training at Grandmaster Shi De Yang’s school in Deng Feng, China.