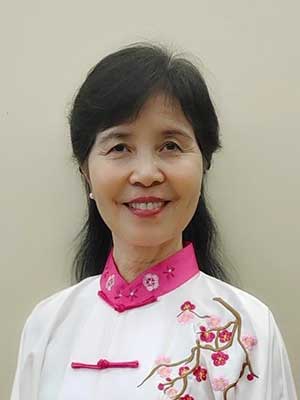 Sing-May Chen grew up in Foshan, China, a city famous for its Chinese Martial Arts traditions. She began her Taichi training at age 19, studying Yang Style under Sifu Ou Rongju. Sifu Chen has been active in the Los Angeles Taichi community since 2005. She received her training from Master Russell Qiu and Master Guo Jie, as well as Grandmaster Zeng Nailing of China. Her portfolio includes Yang Style, Chen Style, Qigong, and weapons (straight sword, broadsword, staff, fan, double fan, and horsetail whisk). Sifu Chen is a 3-time Grand Champion, teacher, and judge, and is passionate about promoting Taichi and Chinese culture in her community. She has served as the chief judge at the Tempt One Martial Arts Championship and Golden Dragon Championships. She is certified as a Taichi Instructor by the American Taichi Health Qigong Center and is one of the founding and active board members of the Traditional Chinese Martial Arts Federation in Southern California.