Chinese Martial Arts (CMA) have a rich history that spans thousands of years. During this time the CMA landscape has evolved into hundreds of different styles. While you can find certain common principles and techniques among the different systems, there are still great differences between the Northern and Southern schools and the Internal and External Chinese martial arts styles. In order to present a fair competition for all athletes, we have established rules and criteria that govern ICMAC tournaments.

WUSHU will be run under ICMAC Rules. This includes ring size, categories, skill levels and age groups. The only exception is compliance with the type of weapon used in international events. This is not an IWUF competition, and we ask all participants to abide by the categories listed on the ICMAC Division Sheet.

Unsportsmanlike conduct by any competitor, parent, or coach, or the use of abusive language, will result in disqualification of the competitor with NO REFUND.

Traditional Chinese Martial Arts and Contemporary Wushu: Any cotton or silk Chinese-styled uniform with frog buttons. Song Shan Shaolin, Wudang and Southern Style (sleeveless) uniforms are acceptable. T-shirts may be worn for Reaction Skills (Sparring, Push Hands, and Chi Sao). Martial arts type shoes are required in forms and weapons divisions. Our goal is to provide a friendly but disciplined competition environment, so we urge all participants to follow the uniform guidelines.

All competitors must be present for the opening ceremony. Therefore, we recommend that if you plan to register onsite, you must do so on Friday or early Saturday so that you will not be delayed. There will be NO onsite registration for Sparring, Push Hands, Chi Sao, and other Reaction Skills. You must register for these events in advance, no later than June 23, 2023. Sanda competitors may register up to the date of the tournament.

Adult Competitors may register in a lower age group if they wish to compete in categories not available in more senior age brackets. (Please contact our office for approval.) However, once you chose to compete in a lower age bracket, all of your divisions must be in that bracket. Competitors must register for all their divisions at the same skill level and age group.

Registration for Sparring, Push Hands, Sanda, Chi Sao, Shuai Jiao and other Reaction Skills will not be accepted onsite but must be done prior to June 23, 2023.  Sanda competitors may register up to the date of the tournament.

The first to register is the last to go.

Competitors will be listed in accordance with their date of registration; the earlier your registration is submitted, the lower you will be placed on the performance list.

4. The salute for empty hand forms:

Upon completing their form, competitors must once again come to attention and salute the Chief Judge. Competitors will wait to receive the scores, then perform one final bow toward the Chief Judge and walk off the floor.

The Open Palm and Fist Salute is widely recognized in Chinese martial arts and is the required salute for ICMAC Tournaments.

5. The salute with weapons:

All the requirements cited for the empty hand forms salute apply to the salute with weapons. In addition, each weapon has its own requirements. The salute with the staff and the spear requires the competitor to hold the weapon with the right fist covered by the left palm. The Pu Dao, Quan Dao and other long weapons also use this same salute. 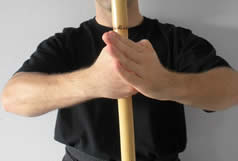 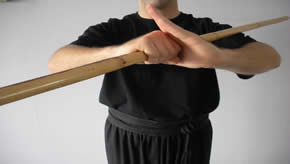 The salute with the broadsword requires the competitor to hold the weapon in the left hand and cradled in the crook of the elbow. Salute by covering the hilt with the right palm. Double broadswords, other similar single-edge weapons and the three-sectional staff will also use this salute.

The salute with the straight sword requires that the sword be tucked under the left forearm. Salute by covering the hilt with the right palm. Double swords and two-handed sword will also use this salute. 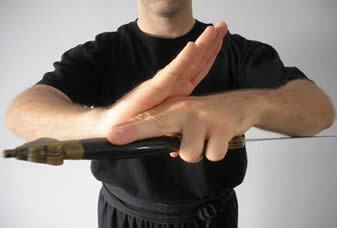 Competition Area: We typically provide rings that are 20′ x 40‘ (possibly smaller for Tai Chi and for Kids/Juniors Divisions). Larger turnouts might require a slight modification in ring size.

All times are given in minutes. A penalty of 0.2 points will be deducted for each infraction of 5 seconds or partial increment thereof.

Taiji 24 & Taiji 32 Sword performed to completion (no time limit). These forms MAY NOT be performed in other Taiji divisions and DO NOT qualify for Grand Champion.

In Taiji and Liuhe Bafa categories, it may be necessary for two or more competitors to perform simultaneously.

In Traditional and Wushu Categories, Novices and Beginners are not subject to Minimum Time Requirements. Maximum Time applies to Teens and Adults. NO Time Limits for Kids and Juniors.

9. Penalties and deductions for forms:

*Competitors whose form does not end in the same quadrant must inform the Chief Judge before performing. No penalty will be assessed in such circumstances.

Re-performing due to forgetfulness will result in a .5 point deduction from the final score. The only exception is for Novice and Kids & Juniors Beginners category.

Long Weapons such as the Quandao and Pudao are also subject to these requirements.

Non-compliance with these weapon standards will result in a .5 point deduction from the final score unless otherwise specified.

Weapons require a certain length in order to be used efficiently. The requirements, with few exceptions, are generally the same for Traditional and for Contemporary Wushu. The length of the weapon is determined by the competitor’s height.

Saber & Swords: The minimum length for the saber and the straight sword requires that the tip of the weapon reach the competitors top of ear when held at the sides.

For Little Dragons, and all other Novice and Beginner Divisions: Weapons are classified in Short and Long Categories only.

Weapons that are not allowed in the above categories are the following: Quandao, Double Sabers, Double Hooks, Double Swords, Chain Whip, 3-Sectional Staff, Rope Dart and other exotic weapons not listed above. If a competitor is skillful enough to compete with any of these weapons, then they cannot be considered a Novice or a Beginner.

Categories for Little Dragons (ages 4-5): The Forms will include Northern and Southern styles and cannot incorporate more than one acrobatic skill.

Categories for Kids, Juniors, and Teens: The Forms will include Northern and Southern styles. Forms that incorporate more than one Acrobatic Skill must be entered in the Other Hand Forms category in the Intermediate and Advanced Divisions.

Categories for Adults: The Novice, Beginner and Intermediate Forms will include Northern and Southern styles. Forms that incorporate more than one Acrobatic Skill must be entered in the Other Hand Forms category in the Intermediate and Advanced Divisions.

Categories for Advanced Adults ages 18-35: divisions will be broken down as follows:

Northern Other: Praying Mantis, Baji, Fanzi, Tongbei, Pigua, Snake Style, and other non-acrobatic styles not considered to be Long Fist.

Northern Open (when offered): All acrobatic styles such as Drunken, Monkey, and Ditang.

Partner Forms: There will be separate categories for Hand and Weapons forms. (mixed teams with boys and girls, men and women is allowed). Only one set of partners is permitted and must be in same age group.

Medals will be awarded from 1st through 3rd place in each division.

No ties are allowed at any level since placements reflect a competitor’s overall standing. Tie-breaking procedures will go into effect to determine the winner.

Competitors must pre-register to compete in Push Hands. No onsite registration will be accepted for Push Hands, Sparring, Chi Sao or other Reaction Skills.

Fixed Step: Both feet must remain in contact with the floor at all times. Heel or toe may be raised briefly, but the foot may not leave floor or change position.

The objective of the match is to uproot and off-balance the opposing player while maintaining own root and balance using Taijiquan (Tai Chi) principles.

Play is begun in a neutral position with backs of right wrists touching. Left hands are placed on (not under) right elbow of opponent. (Reversed in second period.)

Note: The head, neck, spine, and legs may not be attacked and will result in a warning or disqualification depending on the severity of the infraction.

The following will result in immediate disqualification:

Competitors must pre-register to compete in Chi Sao. No onsite registration will be accepted for Chi Sao, Sparring, Push Hands, or other Reaction Skills.

Kung Fu pants, martial arts shoes, and a short sleeve t-shirt are required
Jewelry, rings, or necklaces are not permitted; fingernails must be kept short to avoid injury to other contestants

The objective of the match is for competitors to display good Chi Sao techniques, such as:
Sticking and adhering during a continuous exchange of techniques.
Bridging and trapping skills.
Stable stance with good bridging skills.
Clean blocking and attacking techniques.

Competitors will meet at center on the ring and engage in rolling hands.
The Chief Judge leads competitors in 3 sequences of rolling; the match begins after the third roll.
Judges will look for and score good Chi Sao techniques directed at legal targets.

The entire torso area, which is covered with the chest protector
Light contact to the area protected by the head gear

Accumulation of any three warnings will result in disqualification.
Excessive use of force towards the head and face area.
Unsportsmanlike conduct.

Chi Sao competitors will be separated by weight and skill level on site.

We will NOT offer Shuai Jiao Competition for the 2023 Orlando tournament.

Open to all Fighters including Muay Thai & Kickboxing

We will offer Sanda Competition for our 25th Anniversary Event, scheduled for June 30-July 2, 2023.

Competitors must pre-register to compete in Sparring. No onsite registration will be accepted for Sparring.

For the safety of all competitors, weight limits will be enforced. Fighters will be matched with the nearest weight within each age group.

Mandatory protective equipment must be supplied by the Competitors and must include head protector, mouth guard, groin cup, chest protector (for women), foam gloves with no exposed fingers, and foam foot protectors that cover entire foot. Shin guards are optional.

We recommend (not require) that head gear for Sparring have a Plastic Face Shield as pictured above.

All matches are single elimination consisting of three 1-minute rounds of running time. The time is stopped for injuries or equipment adjustment.

At the end of each round the winner of that round is declared by the decision of the majority of the judges. The winner of two out of three rounds wins the match. In case of a tie after the three rounds there will be a final 1-minute round to determine a winner; if still tied after this round, the winner is determined by the Chief Judge.

Match Length (running time unless there is an injury):

Note: In Case of a Tie in the Juniors, Teens & Adults Categories, there will be a 30-Second Sudden-Death to determine the winner.

In Case of a Tie in the Kids Category, the first to score wins the match.

The above targets require good control since any contact to these areas may result in immediate disqualification.

The following infractions will result in a warning:

The following will result in immediate disqualification:

By definition, light contact sparring implies that blows and kicks must be of a tagging and jarring nature and not executed with heavy impact force!

All Sparring Divisions must have at least 2 competitors for match to take place. If not, the competitors will be moved to the nearest weight class and skill level or spar in an exhibition match.

For the rules of the Traditional Chinese Sword League, see https://swordleague.com/rules.html

A formal procedure must be followed when a competitor or instructor would like to launch a protest regarding a presumed discrepancy in the application of the rules.

An Arbitration Official will be assigned for each tournament. Do Not Approach the Promoter for matters pertaining to Arbitration as your request will be immediately disallowed with no further recourse.